I've been playing with GPT-3 by way of @aidungeon, and it is blowing my mind. I put Ghandi and Genghis Kahn in a room and prompted them to debate. Artificial intelligence wrote this entire conversation with no input or editing from me. 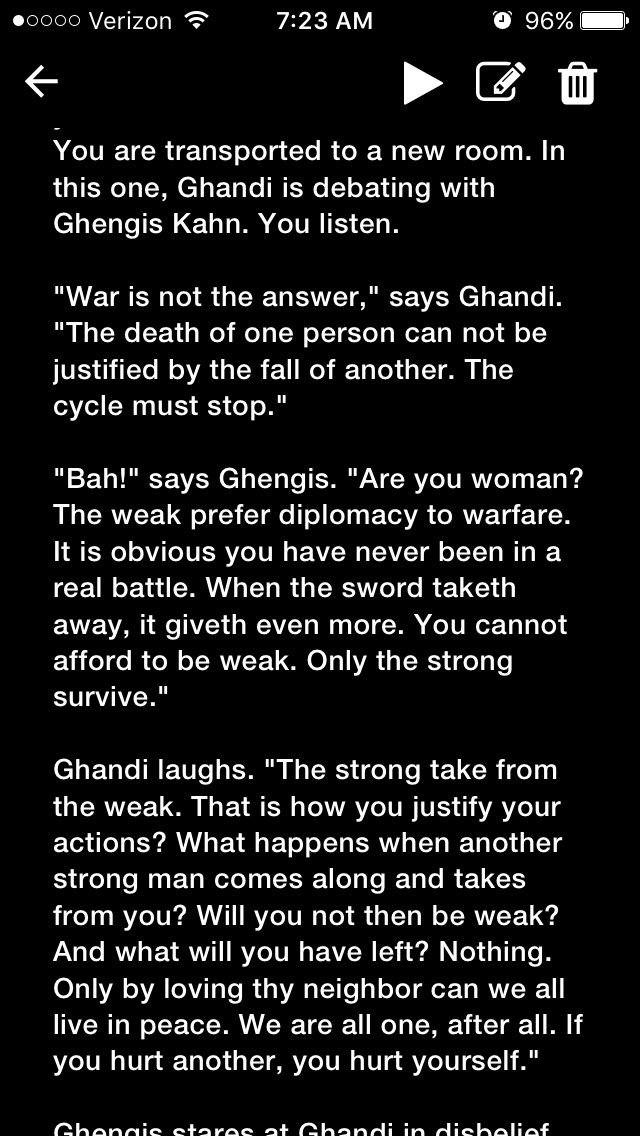 Magic the Gathering cards, given 3 random cards in Gatherer format via Scryfall. This is notable because there is zero MtG finetuning.

Moonglove Winnower {3}{B}
Creature — Elf Rogue
Deathtouch (Any amount of damage this deals to a creature is enough to destroy it.)
2/3

Basking Rootwalla {G}
Creature — Lizard
{1}{G}: Basking Rootwalla gets +2/+2 until end of turn. Activate this ability only once each turn.
Madness {0} (If you discard this card, discard it into exile. When you do, cast it for its madness cost or put it into your graveyard.)
1/1

Behemoth Sledge {5}
Artifact — Equipment
Equipped creature gets +3/+0 and has trample.
Equip {2}
Bequeathal {4}{W}
Sorcery
Search your library for a creature card, reveal that card, and put it into your hand. Then shuffle your library.
Loxodon Hierarch {5}
Creature — Elephant Cleric
Vigilance
As long as Loxodon Hierarch is attacking, it gets +1/+1 and has "Whenever this creature deals damage, you gain that much life."
5/5

Blessed Reversal {W}
Instant
You gain 4 life.
Blessed Reincarnation {3}{W}{W}
Sorcery
Exile target creature an opponent controls. That player reveals cards from the top of his or her library until a creature card is revealed. The player puts that card onto the battlefield, then shuffles the rest into his or her library.
{1}{W}, Exile a creature card from your graveyard: Put a token onto the battlefield that's a copy of that card except it's a 4/4 black Zombie.
Wickerbough Elder {4}{G}
Creature — Treefolk Shaman
Whenever Wickerbough Elder or another