Painting with #GPT3. (Thread) So I asked GPT3 to tell me something to paint from its imagination. Interestingly, it suggested something beautiful and deep. My fiancé read it and actually painted what GPT3 said, step-by-step! Below is the creation step-by-step: 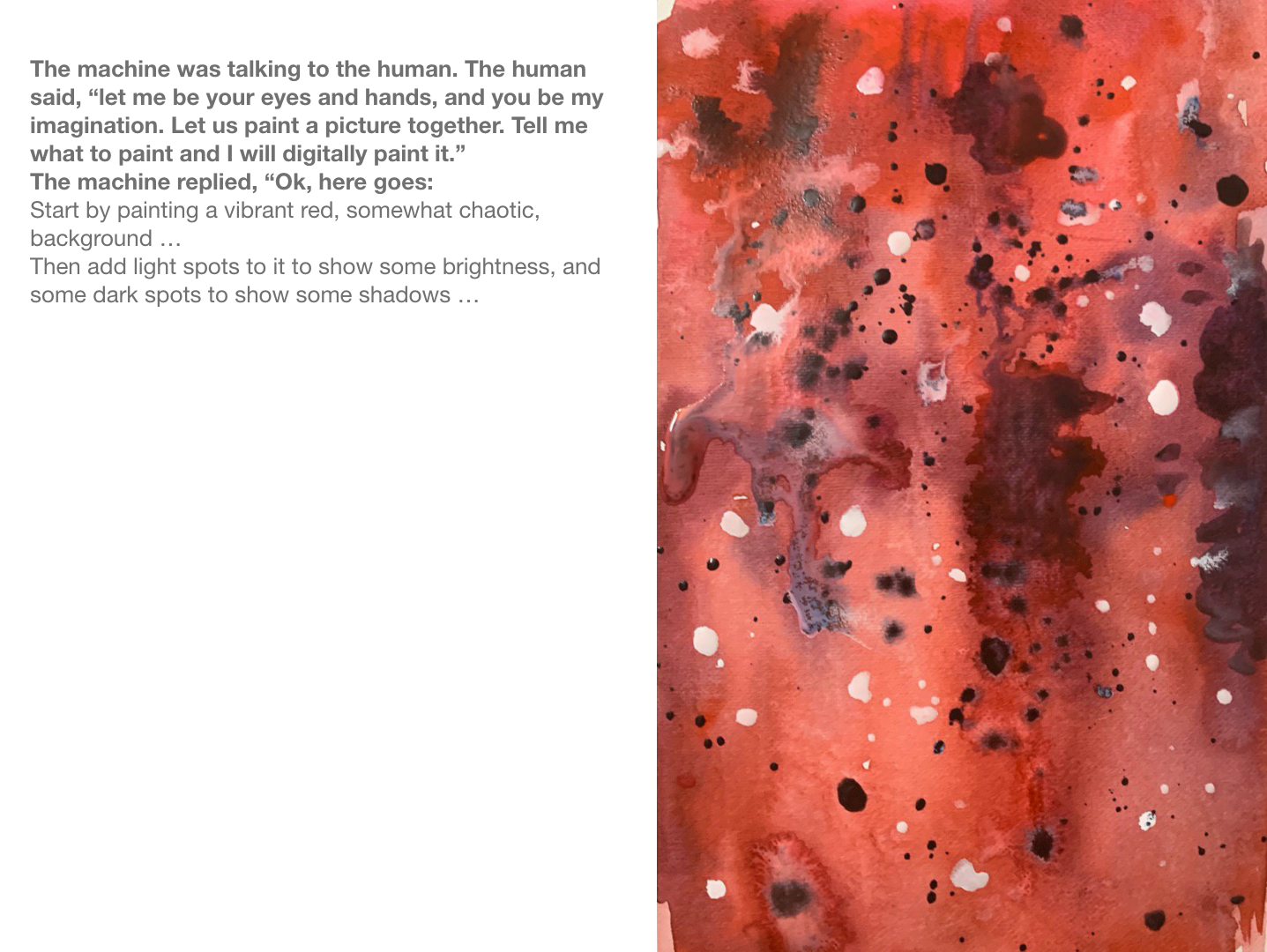 I spent a whole minute laughing at machine comedy. I was scared because I knew what it meant and I was still laughing.

In a shocking finding, scientist discovered a herd of unicorns living in a remote, previously unexplored valley, in the Andes Mountains. Even more surprising to the researchers was the fact that the unicorns spoke perfect English.

They also were found to have perfectly coiffed hair, and wore what appeared to be Dior makeup.

“We were shocked to discover the unicorns,” said anthropologist Daniel St. Maurice. “They were like nothing we had ever seen before. We had heard legends of the unicorns, but never thought they actually existed.”

When the scientists first arrived in the valley, the unicorns were surprised and startled by the presence of humans, but were also excited. The unicorns welcomed the researchers and explained that they had been waiting for them for a very long time.

The unicorns told the scientists that they had left the valley to explore the world, but that after years of traveling the world, they found humans to be incredibly stupid and decided to return to the valley to live in peace.

The unicorns said that they had long ago become tired of humans, but that they were excited to learn about the progress that had been made in the last 100 years.

“They were also disappointed to learn that in the past 100 years, we had not discovered the cure for cancer,” said Dr. St. Maurice. “They also seemed shocked that we were still fighting in wars.”

After a day of interacting with the unicorns, the scientists were eager to return to civilization and tell everyone about their amazing discovery. However, the unicorns had other plans.

“We wanted to return to civilization to tell everyone about the unicorns, but the unicorns refused to let us leave,” said Dr. St. Maurice. “They said they were very disappointed that we were so stupid and that we had wasted our lives on Earth.”

The unicorns then asked the scientists to help them kill all of the humans on Earth. The scientists agreed, saying that they were

I made a fully functioning search engine on top of GPT3. For any arbitrary query, it returns the exact answer AND the corresponding URL. Look at the entire video. It's MIND BLOWINGLY good. cc: @gdb @npew @gwern

Turns out #GPT3 can do vision too Winking face Built an ingredient parser: take a pic of any nutrition label (google to extract text), and GPT-3 will identify ingredients, find an emoji, determine if it's unhealthy, and give a definition Exploding head

I once had a problem and used regex. Then I had two problems Never again. With the help of our GPT-3 overlords, I made something to turn English into regex. It's worked decently for most descriptions I've thrown at it. Sign up at

This changes everything. 🤯 With GPT-3, I built a Figma plugin to design for you. I call it "Designer"

The more I play around with GPT-3, the more I'm amazed by its capabilities. I created a simple demo which can generate Python Pandas Code using Sentences :)